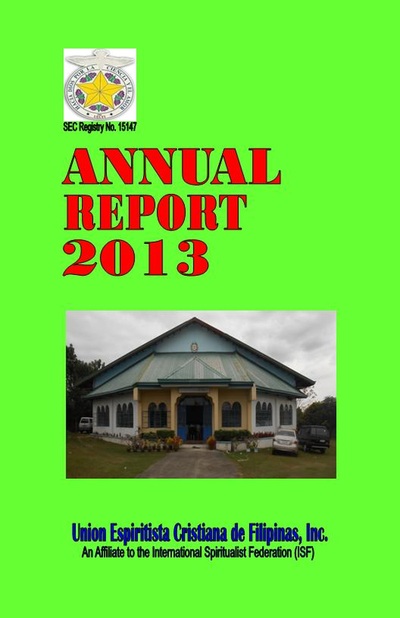 President General 109th Anniversary Message
It is with distinct pleasure that I present the accomplishment report of the Union Espiritista Cristiana de Filipinas, Inc. (UECFI) for 2013. On its 109th year of operation under the Spiritual Guidance of the Holy Spirit, the UECFI has continued to exert its leadership spiritually, propagating spiritual teachings and séances, promoting social and spiritual progress for the triumph of peace, brotherhood and justice among all men and to foster the moral and spiritual culture of mankind.

The year 2013 had been marked by continuing challenges to the Organization. With a determined effort, it made its victorious way through in battling the encountered problems within the religious (spiritual) organization, hand in hand with overcoming the threat to its image, and thus, redeeming the respect it once enjoyed.

This report gives a glimpse of how the UNION, moved by its vision of “Globally renowned as a well-established and highly regarded Religious (Spiritual) Organization with love and commonality of understanding among its members striving for material and spiritual salvation and purification”.

With due respect and recognition, I also take this opportunity to acknowledge the valuable contributions of our partners in disseminating spiritual science teachings, different committees of the Board of Directors General (BODs), Regional and Provincial Committees and  Local Committees.